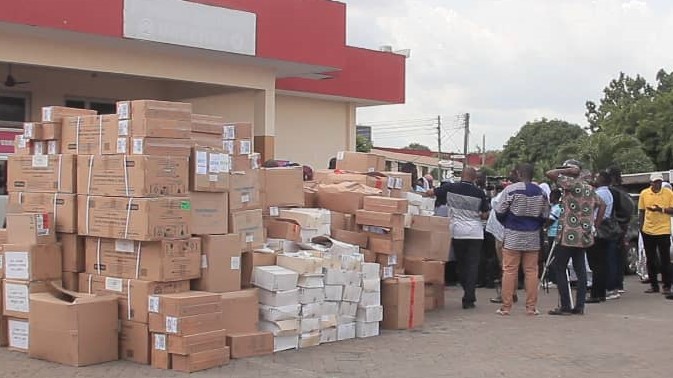 Ghanaian doctor based in Germany donates medical supplies worth €164,000 to Manhyia Hospital

A Ghanaian doctor based in Germany has donated medical supplies worth over €164,000 to Manhyia District Hospital in Kumasi.

The items aimed at improving the delivery of quality healthcare in the hospital were delivered by Hilf Ghana eV, a company based in Germany.

Others are; wheelchairs, cots, ultrasonic devices, ventilator, infusion equipment, dental chairs, among others.

Dr. Abass Ganihu said this is part of his plan to help health facilities improve their services to Ghanaians.

It has imported about five containers full of medical equipment and consumable medical supplies which will be distributed to health facilities across the country.

Meanwhile, he expressed concern about what he said were the huge import bills paid to get the items delivered.

Also, there were difficulties in getting the items distributed to the required facilities due to some challenges with the Food and Drugs Authority.

“Last time the bill they gave me in a one foot container was over $400,000. They really wanted to take it. I had really tough challenges with the Food and Drugs Board he complained.

Manhyia District Hospital is one of the busiest hospitals in the Ashanti region, almost on par with the regional hospital.

It performs around 80 deliveries in a week, with one of the highest attendance rates in the outpatient department (OPD).

However, insufficient infrastructure remains one of the main challenges facing the hospital.

He said the donation was timely as the facility wants to provide better service to patients.

Dr. Hussein commended the donors for their kind gesture to equip the hospital for the delivery of quality health care.